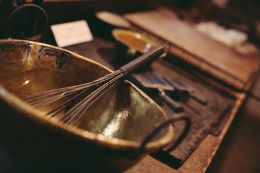 The Bakery House was owned by bakers already from the 17th century. When the last baker died in 1972, the town bought the house entirely with its furnishings and fittings. It is sure, that the site of the bakery was a built-up area since the Middle Ages, and the rooms of the bakery parts are the oldest. The first known owner of the house was Joachim Hübner baker during 1686-1699.

The bakery is located in the right wing of the house, on the left side there is the two rooms and a kitchen flat, and on the place of the former storage is now the caretaker’s flat. The former flour warehouse was rebuilt to a confectionery at the end of the 19th century. The room next to the street was designed for a bakery shop, which then was divided further to a confectionery. The visitors are allowed to enter the bakery home on the right side. The two small rooms and the kitchen furniture exhibits the 19th century’s smallholder craftsman’s family life style and dwelling culture as well.

The Bakery Museum was opened during a ceremony on June 8, 1975, when thanks to the director of the Bakery Factory of Sopron the first visitors were welcomed with croissants and twists.