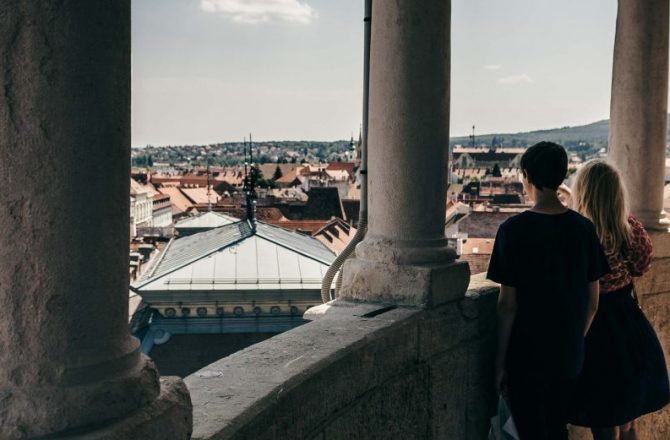 OFFICIAL WEBSITE:
www.tuztorony.sopron.hu
The tower built upon the ruins of Roman walls is the symbol of the town. The lower square base was functioned as the northern gate tower of the town walls from the 13th century. The characteristic shape of the present tower, the baroque balcony, the spire and the clock tower with a multi-stored onion dome dates from the reconstruction after the town fire of 1676.

The guards of the tower had an important job. They indicated the position of fire in the town with colourful flags by daylight and with lanterns at night. The watchmen called the attention of the inhabitants to strangers, foreign soldiers and wine caravans coming to the town. They could show their musical talent as well since they provided music on weddings, marriage celebrations, funerals, and town festivals on the basis of the contract with the Town Council. The tower guards were greatly important in the life of the town and sounded their trumpets every quarter of an hour from the balcony.

The double-headed eagle is the gift of II King Ferdinand and Queen Eleanor for the Hungarian Diet of 1622 and for the remembrance of the Queen’s coronation in Sopron. The final place of the eagle became at the top of the tower during the feast for Emperor Leopold. For this time the clock was repaired and chimed the bells again.

The Fire Tower is also the symbol of loyalty. The citizens of Sopron and eight settlements were depicted on the relief showing reverence to Hungary on the referendum held on 14th December, 1921. Based on the plans of Rezső Hikisch, a baroque gate frame was designed to commemorate the event. The sculptural composition above the gate – the citizens of Sopron paying homage to the mythological figure of Hungaria – is the work of Zsigmond Kisfaludi Strobl.

The Tower underwent another significant change between 2011 and 2012. The entire tower base and body was strengthened with concrete plates and steel strands. The most spectacular part of the restoration was the re-opening of the medieval gate. The 17th century’s bastion and tower guard house reconstruction was also renewed with the Fire Tower.

From the tower balcony visitors get a spectacular view to the town and its surroundings. The new visitor centre functioning in the tower base supply visitors with further information on the exhibitions of the Soproni Museum.