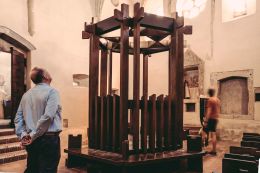 The medieval synagogue was built at the end of the 12th century and the beginning of the 13th century. It was a tabernacle, an assembly hall and a school also. The Jews living here dealt with trade and finance were not really rich people although they managed to build up this Gothic styled synagogue at the beginning of the 14th century – which is nearly unique in Central Europe.

The Jewish community usually had more community buildings. One of them was the spital which gave temporary accommodation to travelling tradesmen and the other one was the ritual bath which can be seen today as well.

The main entrance’s decorated tympanum and the two lateral sides of the staircase originate from the time of the construction, around 1300. The synagogue is famous for one of the earliest pieces of Gothic architecture in Sopron, which preserved its originally painted red colour. One specialty of the hall is its arching, which technique was used by rich merchants in Regensburg as their house towers’ home chapels. The two centres of the synagogue are the niche for the ark and the pulpit. The niche is richly decorated with stone frames and pediment and on this visitors can see bunches of grapes and leaves painted with the colours of nature. Only the foundation of the pulpit is original, but the layout, its location, the high ballustrade and the reading pulpit turning to east follows the original pattern. The women had a separate oratory with separate exit, and they were able to follow the events in the centre hall only through some narrow edges of the window. At the end of the whole site still can be seen the ritual bath, which has an important significance in the Jewish religion since ancient times because of the strict distinction between pure and impure things. The Mosaic Law prescribes plunging into living water, but here, in the synagogue this was impractical, so a fountain with living water was built up. The visitors are allowed to experience the well in a little room with the archaeological artefacts found in it as well.

In 1526, the inhabitants of Sopron expelled the Jewish population so the synagogue was left to ruin. It was restored after the 1967’s monument researches.