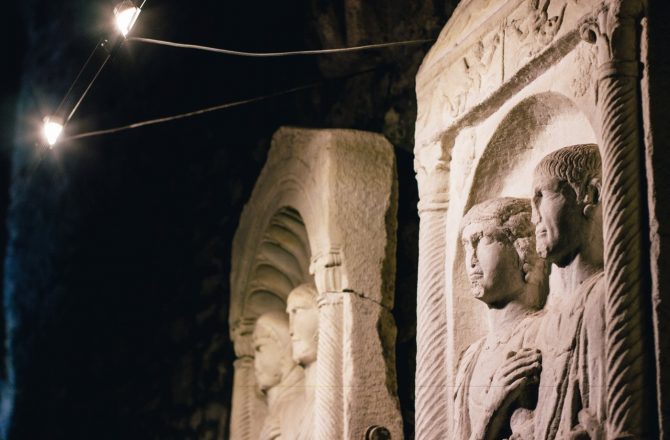 Stone relics from Scarbantia, the Roman predecessor of Sopron, and its region are exhibited in the cellar of the Fabricius House. The Gothic cellar houses not only a Roman Lapidary, but the original stonework sanctuary built for the god Mithras in Fertőrákos. A special treasure is exhibited in the smaller room of the lapidary, the shrine of a Roman woman, Scarbantilla, named after Sopron, Scarbantia.

The most prominent pieces in the Gothic quadripartite hall are the enormous early 2nd century marble statues of Juno, Jupiter and Minerva which are astounding even as fragments. Originally made for the church of the Capitol raised on the Forum, they came to light when the foundations of the town hall were laid in the winter of 1893-1894. The inscriptions and finely carved reliefs on gravestones and altars illustrate the social and religious life in the town. The richly ornamented marble headstone of Casius Sextilius Senecio Centurio and the relief of Cotonius Campanus amphitheatre game master are also of exceptional value. On the basis of the costumes visible on the gravestones the visitors have an insight into the coexistence of the Roman and the mysterious Celtic population. The archaeological exhibition and the Roman Lapidary can be visited with one ticket.
January-December: Tuesday-Sunday: 10.00-18.00
On Mondays the exhibition is closed.