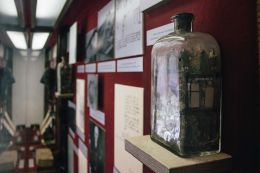 For more than 200 years the village of Brennbergbánya was one of the most significant coal mines in Hungary. The first-class coal production wanted miners to be prepared for heavy physical work. The work for the miners of Brennbergbánya was particularly difficult, because this was the deepest mine of Hungary with the highest pressure, raising difficult technical problems.

According to a legend, in 1753 a shepherd from Bánfalva saw a miracle: burning stones. George John Rieder angle smith was not afraid from the vision he brought home the stones and used it. Then was the coal in Brennberg discovered. Multiple prosperities, failures, restarts, shutdowns, frequent tenant changes after 1789, with the copany of Vencel Schneider, the continuous coal mining was started finally. Over the years the tenants and the owners were often changed, but the mining of high standard and professionalism was permanently expanded. The increase in production inevitably increased the number of workers. In 1952, the mine was said to be inefficient and uneconomic, so it was closed.

The museum takes place in the engine house of the first hoisting shaft operated by a steam engine. The exhibition shows the years of the development of coal mining, mining equipments and a miner’s house as well.